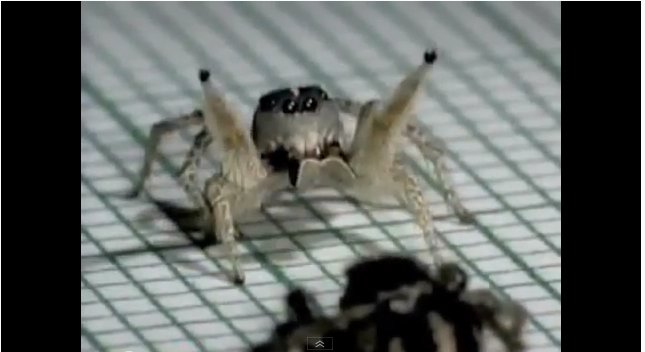 I think I have mixed feelings about spiders. We had a smallish one – about the size of a dime – living in the chandelier above our dining room table for weeks one summer, whom we named Boris, probably because of the Who song. We got pretty attached to him/her and worried that he/she wasn’t getting enough to eat. So, as it was summer and there was a constant cloud of fruit flies in our compost bin, we moved the compost bin into the dining room from time to time so he/she could catch some flies. Then autumn came and we decided we better move Boris outside, which we did, and he/she likely died of exposure shortly afterwards leaving no heirs apparent as keeping him/her inside prevented Boris from meeting a spider of the opposite sex and creating a lineage. Essentially we totally effed up the cycle of life and killed Boris’s future family off before they even got a chance to exist.

So, I guess what that story proves is that I’m not too scared of spiders, and that I’m kind of an asshole. NOT THAT YOU ASKED. If there is a spider on me, however, I will freak out something crazy. Because those things bite. In fact, I got bit by one two weeks ago and it’s finally just healed now.

This guy, I think I would like to keep as a pet. Look at him rumba! (via Neatorama)