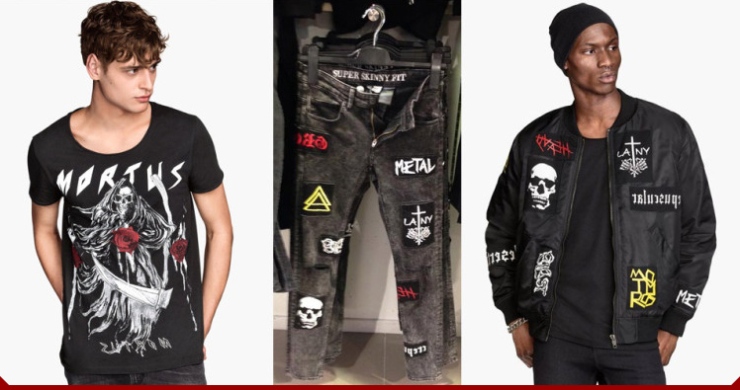 Did H&M create fake neo-Nazi metal bands in order to “honor” them and sell clothes?

Metal Injection is investigating the weirdness.

A marketing campaign by some entity calling itself Strong Scene Productions claimed to be designed to sell a new “metal” line by the Swedish retailer.

The campaign purported to be highlighting forgotten underground metal bands of yore. The weird thing? None of them actually appeared to exist before a couple of weeks ago.

“As illustrated by the bomber jacket and t-shirts worn by the models of H & M, the new items feature logos from long-forgotten underground goth- and thrash acts such as the French LANY, Mexican MORTUS, American “cosmic hippie metal” -gurus MYSTIC TRIANGLE and GREY from Germany – the originator of the whole symphonic female metal-genre.

“Here’s the problem, none of these bands have any sort of history beyond pages created this year. For example, Strong Scene claims to be founded in 1999, yet they only recently launched a Facebook page. They have an amazing Geocities-like “official” website listing all their bands, none of which have info on them available anywhere.”

And some guy on Twitter who’s a metal something or other claims these bands are all his favourites, though the tweets have been removed since Metal Injection posted them. See them there.

“But here is the absolute worst part, if this is all a giant marketing stunt. Two of the bands seem to have ties to the NSBM scene (that’s National Socalist Black Metal aka racists/neo-nazis). For example, the bio of the band “The One” lists them as being a part of the official band page of the record label “National Heritage Pride.” The band LA/NY have imagery of Hitler on their band profile.”

The image has since been removed from wherever it came from. But still. What the what?

H&M reportedly says they know nothing about any of this, and after the story broke, it seems that Strong Scene distanced themselves from H&M and claimed the whole thing was some kind of joke, and that they are actually “a one- time improvised, collective art project in the vein of Spinal Tap, Monty Python and the Yes Men with no intentions on anything except for art.”

Er, yes. Just like Spinal Tap. But with Hitler. Makes sense. Either that or a super idiotic campaign gone horribly wrong.

Either way, I vote this one a big fail. Your art, I like it not, Strong Scene.